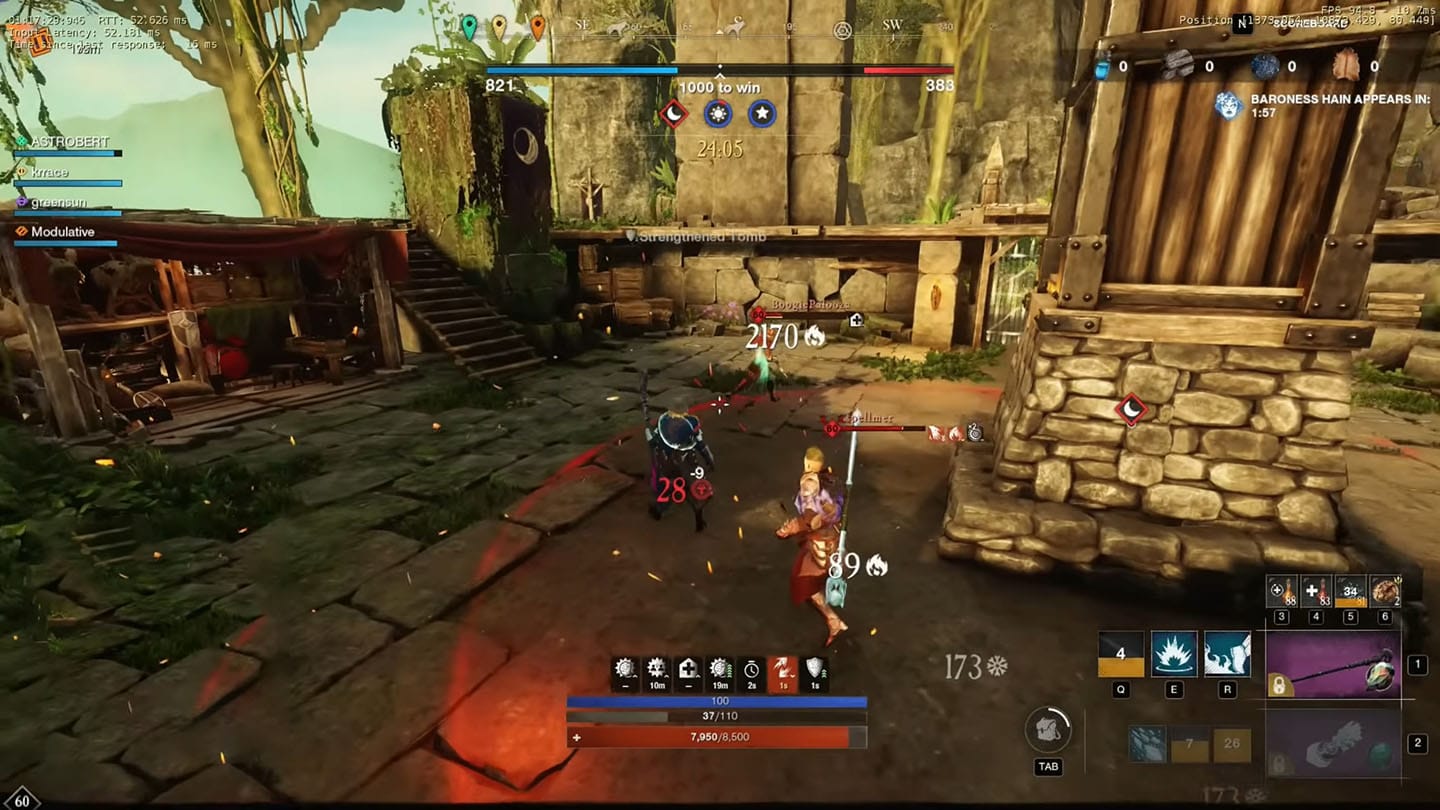 As of this writing, Amazon’s New World MMORPG has a high concurrent player count that doesn’t show any slowing down signs. However, before enduring lengthy wait periods or simply browsing the server list, you might consider tweaking New World’s settings for maximum performance to play the game in a high framerate, a stable 60 FPS or more, for the best gaming experience.

System requirements for New World seem to be relatively low at first glance. However, you should be aware that this is an MMORPG, and popular locations may become rather crowded, representing a tremendous effort for a CPU and GPU to render in real-time.

The lack of Nvidia’s DLSS or AMD’s FidelityFX Super Resolution means you’ll have to rely on adjusting some graphics settings if you want to prevent any significant fps drops at high resolutions.

Under the Video Quality option in New World, you may choose from four presets: Very High, High, Medium, and Low (the default).

If you pick a desired preset option, you’ll get a combination of the various settings, from mediums to highs to lows. However, Amazon makes the process easier by maintaining a standard set of options, whether you like it or not. For example, if you choose High, all of your settings will be applied uniformly, and you will have to fiddle with them individually if you want to get the most out of them.

As expected, Very High is the most demanding and requires a more powerful system to handle, and you would want to have only the best gaming PC to play New World. Low is the best option for those owning low-end machines and don’t mind losing some of the New World’s shine and unusual lighting oddities in exchange for a higher frame rate. We’ve avoided using low settings wherever feasible to prevent the game from appearing ugly. 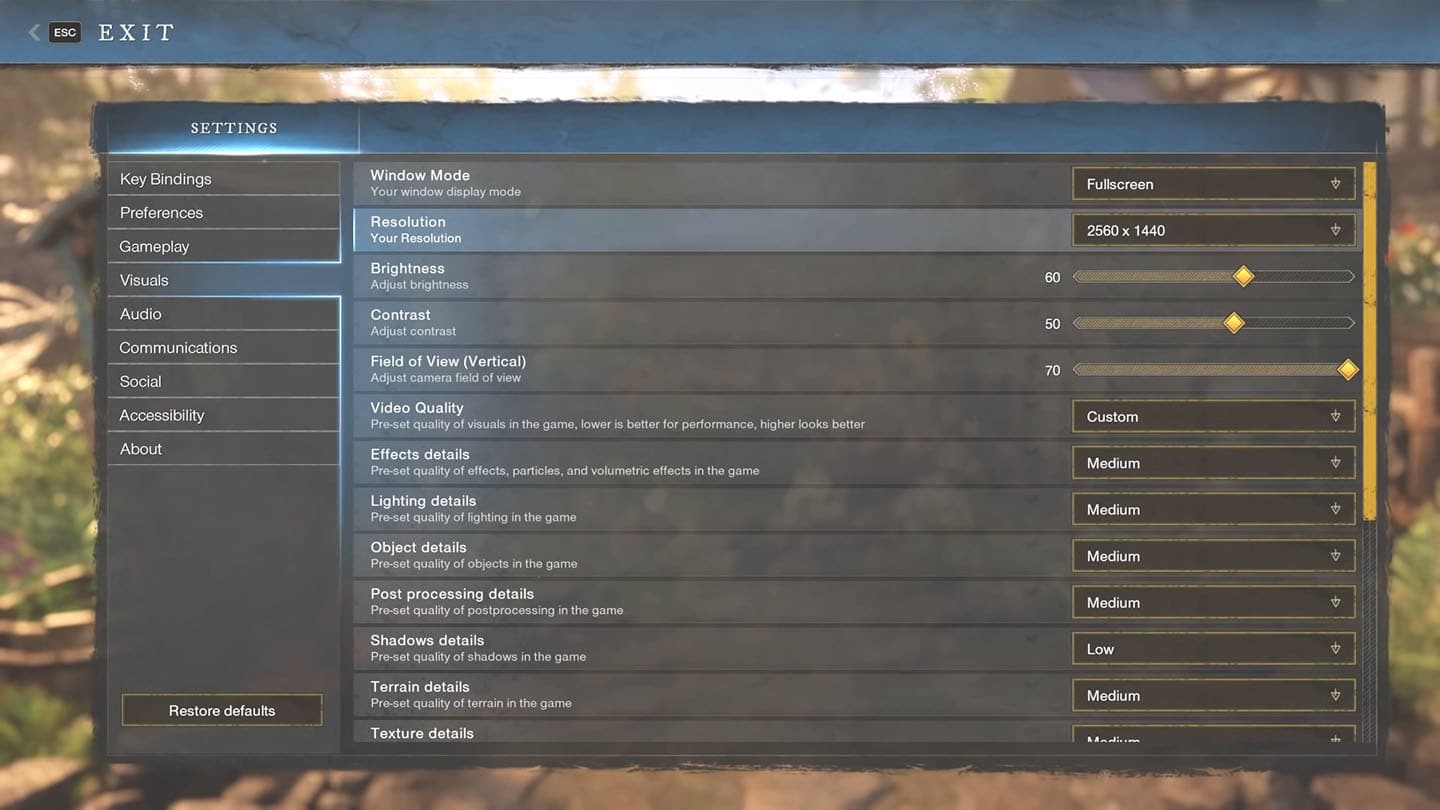 We tested each setting to determine the most impact on the FPS count. We eventually came up with a combination of settings that provide the best game performance for as many people as possible. Before you go ahead with our optimization guide, keep in mind that Amazon seems to be working on patches that also include performance improvements over time.

Here are the best New World settings that should give you acceptable frame rates without compromising too much of the game’s graphical fidelity.

Player nameplates have quite an impact on the frame rate, so the default value is 15. Although there isn’t much to gain by going below 15, decreasing it more may let you enjoy the environment without as much clutter on the screen.

If you wish to improve the framerate, you’ll need to adjust terrain details.

This relates to the surrounding vegetation, which you spend a lot of time in. Lowering this setting doesn’t degrade the game’s visuals that much, and it’s a worthwhile compensation to set it to Medium.

Texture details cover a vast area, giving a sense of profoundness to almost everything you see on your screen. But it’s a trade-off: Higher you set, lower are the framerates. We don’t recommend turning it all the way down because of the noticeable loss in quality, but having on Very High may decrease FPS significantly. You may want to try first to set it to High. If you still find it too demanding, set it to Medium as it’s a reasonable compensation between the picture clarity and overall performance.

As the name suggests, shadow details are a setting that defines how shadows appear in the game. Shadows may slow the performance down significantly, but you don’t need to set it to Low. Medium would be the best choice here.

There are several ways to improve your frame rate, and dynamic resolution scaling effectively boosts performance. To prevent frame drops, it utilizes decreasing the pixel count in some regions that would otherwise lower your framerate. But it also reduces the overall visuals tremendously. Therefore, we can’t suggest it turning on unless its’ absolutely required to maintain an acceptable frame rate.

To maintain a seamless gameplay experience, you may disable V-Sync, especially if you have a gaming monitor supporting either Nvidia G-Sync or AMD FreeSync.

Stuttering and frame drops are common in New World, and adding a frame limit may help alleviate this problem. There’s no need for a high frame rate, but the limiter is restricted to 30fps and 60fps, which won’t work for many of you who have a higher refresh rate since the game isn’t really competitive in that sense anyhow. Keep the background fps cap on, though, since it helps keep the overhead low when you exit the game. Your PC will thank you for it.

Effect details influence the quality of New World’s visual effects, such as particles and volumetric effects. However, it doesn’t impact the frame rate, so that it may be left at High.

There is no ray tracing in New World, and lowering the lighting quality has a minimal impact on performance than you would expect. So you can set it to High without worrying about lowering your framerate.

Effects like bloom and darkening of objects, added to the picture after it has been produced, are covered in this section: Again, you can keep this on High or Very High without a noticeable decrease in performance.

It’s recommended if you want a more subtle visual experience, concentrate on Texture details and Terrain details rather than making drastic modifications to their Video Quality presets. You should now be able to play New World with a steady frame rate.

These are the most crucial New World settings here. The others are mainly involved with the game’s aesthetic appeal and the quality of its effects. These may vary depending on how powerful your PC is, but most gamers will prefer to play with these settings as high as possible.